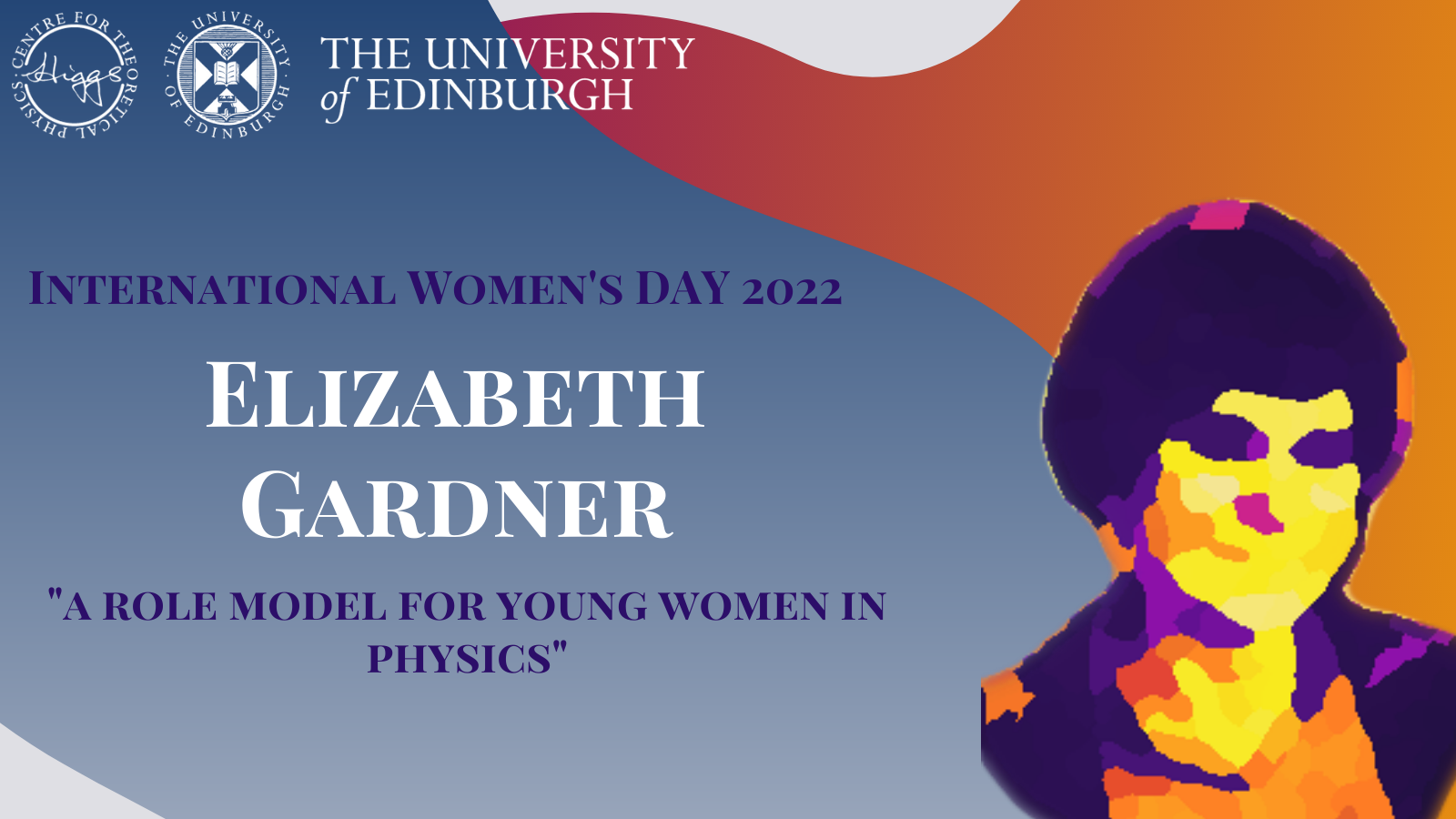 This year, for International Women's Day 2022 we'd like to highlight Elizabeth Gardner, her life and contributions to physics and science at large.

Elizabeth Gardner was an alumna of the University of Edinburgh and a brilliant scientist. Her work laid the foundations that Giorgio Parisi built upon, resulting in a Nobel Prize in Physics in 2021(including his contribution to the paper “Determining the nonequilibrium criticality of a Gardner transition"). Her name has perhaps been buried in history but on this International Women’s Day the Higgs Centre would like that to change.

Gardner first joined the University of Edinburgh to study for her undergraduate degree in Mathematical Physics. During her time at the Physics department, she gained a reputation for excellence, receiving top grades in her modules and winning class prizes. After graduating with First Class Honours, she went on to study for her DPhil at Oxford, where she began working on gauge theory. She never formally graduated from Oxford, simply deciding it would be something for her to do later in life. Gardner spent 2 years at Saclay. There she set the foundations of her future work, building a bridge between the theory of disordered systems and field theory.

She returned to the University of Edinburgh in 1984 and continued to work on disordered systems, and by 1985 published the paper “Spin glasses with p-spin interactions”, which involves the first description of the Gardner transition.

Gardner later worked alongside French theoretical Physicist Bernard Derrida, on developing a solvable general model for the random energy in spin-glass theory. This would lay the foundation for her later works. Derrida has spoken about Elizabeth and has provided a quote, “Working with Elizabeth was both pleasant and very stimulating, she was quick to understand and to push very difficult calculations. She was shy but very friendly and I feel that I was very lucky to collaborate with her and I learnt so much during our collaborations.”

Gardner also made great contributions to the thesis of neural networks. The consecutive papers published in 1988: “Optimal storage properties of neural network models” became some of her most notable work. The first paper introduces the phase space of interactions, the “Gardner Volume”, the second physical concept to be named after her. It also considers the maximum storage capacity of network models. The paper that followed, a collaboration with Derrida, generalises to allow errors in storage but with a cost.

The two papers brought a new approach to statistical mechanics, and hence featured in the collection of viewpoints in Journal of Physics A which highlighted the most influential papers of the journal. A former colleague, Professor Annette Zippelius describes Elizabeth’s work on neural networks and spin glasses as “an outstanding example of a powerful analytical calculation in a field where these are rare”.

When Elizabeth re-joined Edinburgh University, she was supported by the Science and Engineering Research Council (SERC) for 2 years to work in Theoretical Particle Physics (the field of her DPhil). Her application for an additional fellowship was unsuccessful. The University was keen to help her continue her work at Edinburgh, which she manged to do by gaining a fellowship from the University itself. Her second application for the five-year SERC fellowship was successful in 1897.

Sir David Wallace, who was the Head of Department of Physics and Astronomy at Edinburgh when Elizabeth was a staff member, has fond memories of Elizabeth. “Elizabeth was an interesting person. On the face of it, when you met her, she was quite shy, quite retiring, very self-effacing, until she started talking about physics and mathematical physics and then she just opened up as a person. She was passionate about science and physics. She was such a curious and interested person, so Elizabeth had wider curiosity than just fundamental physics, anything that was challenging, really.”

In 1986, while still working at the University of Edinburgh Gardner received a cancer diagnosis, and although the physical impact of the illness on her became evident to her colleagues at the University, Gardner chose to bear her illness quietly. The portrait written by her colleagues Derrida, Aitchison and Wallace refers to her “selfless support of graduate students,” and her “flowering science” during this time.

Elizabeth was interviewed for a lectureship in 1988, an interview that ended in the assurance of a permanent position at the University of Edinburgh after her 5-year fellowship. Three weeks later, just nine months into her fellowship Elizabeth Gardner succumbed to the illness that she had been fighting for two years.

Elizabeth’s legacy lives on in her science, in the field of Physics she contributed to so significantly. The Higgs Centre for Theoretical Physics published an International Women’s Day post in 2021, including a profile of Gardner, and more recently a Fellowship in the School of Physics and Astronomy has been set up in her honour.

The Elizabeth Gardner Fellowship will provide a collegial environment for postdoctoral researchers from backgrounds underrepresented in the School’s current academic community. In context, for the academic year 2018/2019, the Institute of Physics (IOP) reported that although there were 91% more female Physics professors than in 2012/13, yet, overall, the percentage of women in Physics departments was still only 25% during the same academic year. People with minority ethnic backgrounds only made up 16% of academic staff in Physics departments across the country.

Elizabeth’s former collaborator, Annette Zippelius commented, “Elizabeth is definitely a role model for young women in physics and a fellowship in her name will be a powerful tool to promote young women in science.”

In the words of Sir David Wallace “the legacy she has already left is very significant”.

Her contribution to neural networks and disordered systems influenced the statistical mechanical approach to the field, and the latest Nobel Prize was awarded to developments on the foundations that she built.

Professor Derrida has spoken in support of the fellowship in Elizabeth’s name, stating “More than 30 years after her death, we can clearly measure the impact of her work, and given that she did it all before she was 30, one can only imagine what her influence on theoretical physics could have been if she had lived longer.”

Words from the Author:

While writing this I have gained insight into Elizabeth’s life and career. The more I learned, the more inspired I became by her. Her work was remarkable and vital to the development of her field.

While reading through and listening to the interviews from her colleagues, it was clear how much respect everyone had for her. They describe her quiet temperament that she held until she spoke about science. I empathise with her quietness. As a young physics student, I felt a pressure to be loud to achieve success; to be forceful in order to stand out, especially as a young woman in science. The impression I have gained while researching Elizabeth is that she either did not feel that pressure, or she did not let it influence her personality and her work. She knew her science demanded respect. That is something I really admire about her, along with her evident passion for theoretical physics and mathematical problems. Her love for physics is so clear, not only in the impression she left on her colleagues but in her work and her career. She is a true inspiration to any physicist.

Li, H., Jin, Y., Jiang, Y. and Chen, J.Z., 2021. Determining the nonequilibrium criticality of a Gardner transition via a hybrid study of molecular simulations and machine learning. Proceedings of the National Academy of Sciences, 118(11).

This event is part of: