Discover and celebrate with us 8 women who contributed to Physics, Astronomy and Mathematics in Edinburgh (and beyond).

In no particular order: 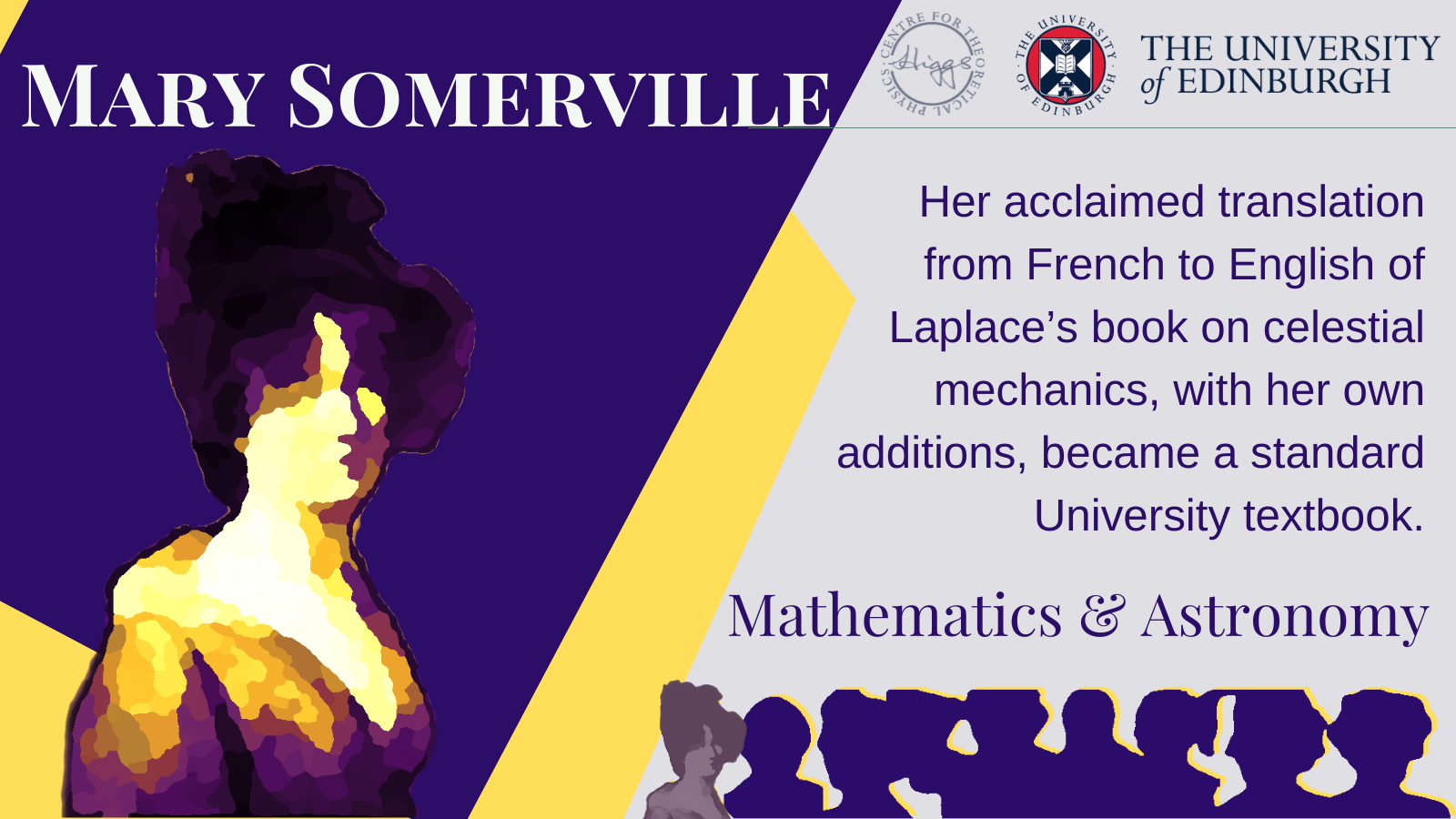 Mary received little formal education and was mostly self-taught in mathematics. In 1811, age 30, she was awarded a silver medal for her solution to a Diophantine mathematical problem.

Her acclaimed translation from French to English of Laplace’s book on celestial mechanics, with her own additions, became a standard university textbook. Her book On the Connexion of the Physical Sciences became one of the best-selling manuals of the 19th century, highlighting the underlying unity of scientific disciplines.

She was the joint first female member of the Royal Astronomical Society (with C. Herschel). She campaigned for votes and education for women - today she is featured on the Scottish £10 note!

Elizabeth attended the University of Edinburgh for her undergraduate degree in Mathematical Physics, during which she was awarded the Tait Medal and Robert Schlapp Prize in 1979. She then undertook doctoral studies in Theoretical Particle Physics at Oxford; despite fulfilling the requirements, she never formally graduated.

She later returned to Edinburgh to assume a senior postdoctoral position and proleptic academic appointment in the Department of Physics.

She was known for her pioneering work on a phase transition, known as the Gardner transition, and on neural networks. 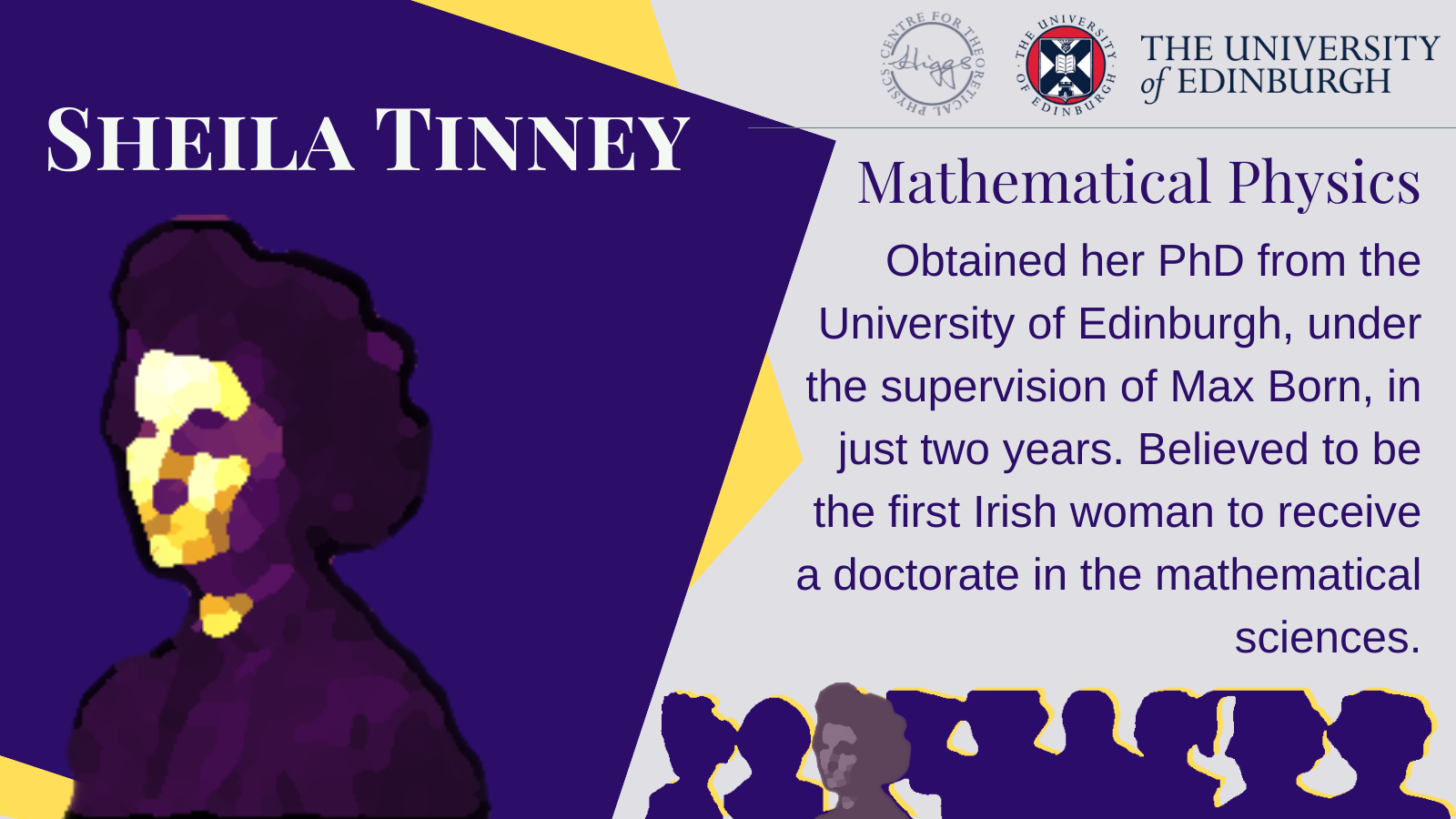 Sheila obtained her PhD from the University of Edinburgh in 1941, completed under the supervision of Max Born in just two years, is believed to be the first Irish woman to receive a doctorate in the mathematical sciences.

In 1941 she was appointed to an assistant lectureship in University College Dublin, at the age of 23. She was promoted to statutory lecturer in 1945 and associate professor in 1966. Visitor at Princeton, USA.

She was one of the first four women to be elected to full membership of the Royal Irish Academy in 1949, and later served on its council. 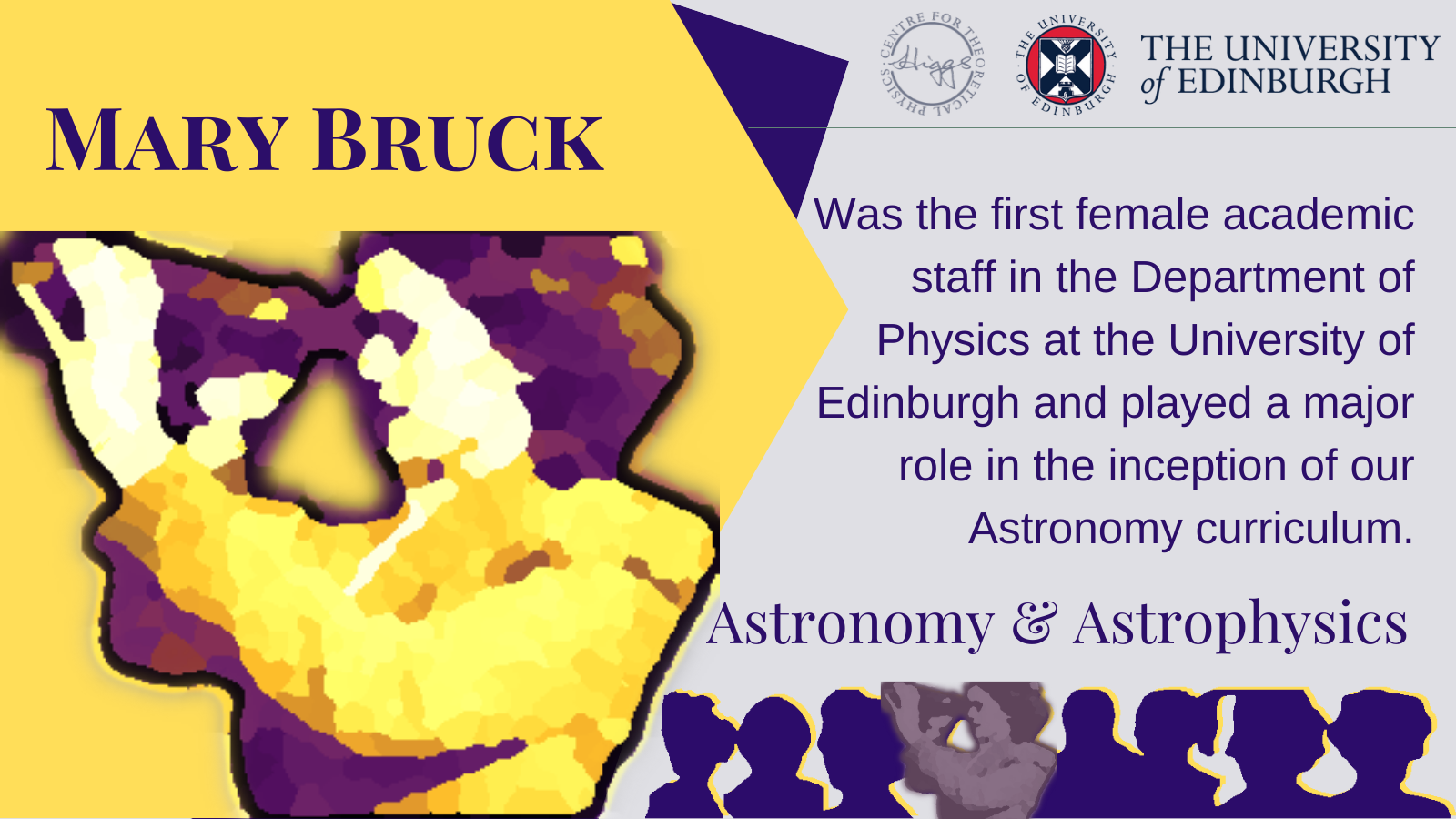 On retirement she became an historian of her subject, with particular emphasis on the under-recognised role of gifted women scientists.

She made astronomy more accessible for the public through broadcasting a series of radio programmes for children, ‘The Sun, Moon and Stars’ in the mid-50s in Ireland. 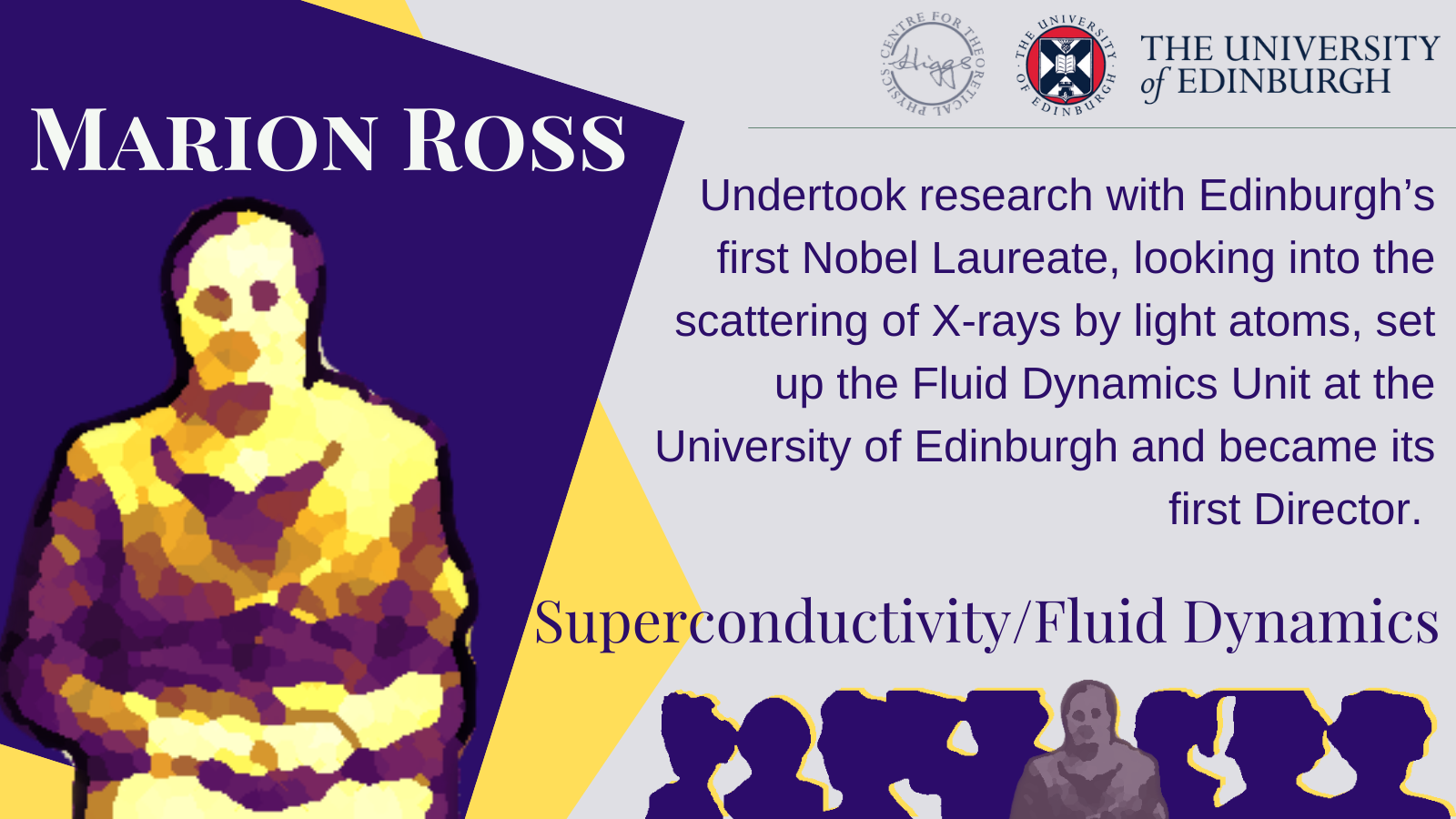 Marion studied mathematics and natural philosophy at the University of Edinburgh, receiving prestigious bursaries in mathematics during her first and second years.

She undertook research with Edinburgh’s first Nobel Laureate Professor Charles Glover Barkla, looking into the scattering of X-rays by light atoms. She later returned to Edinburgh as a lecturer.

She set up the Fluid Dynamics Unit at the University of Edinburgh and became its first Director. In recognition of her contributions, she was elected member of the Royal Society of Edinburgh in 1951. 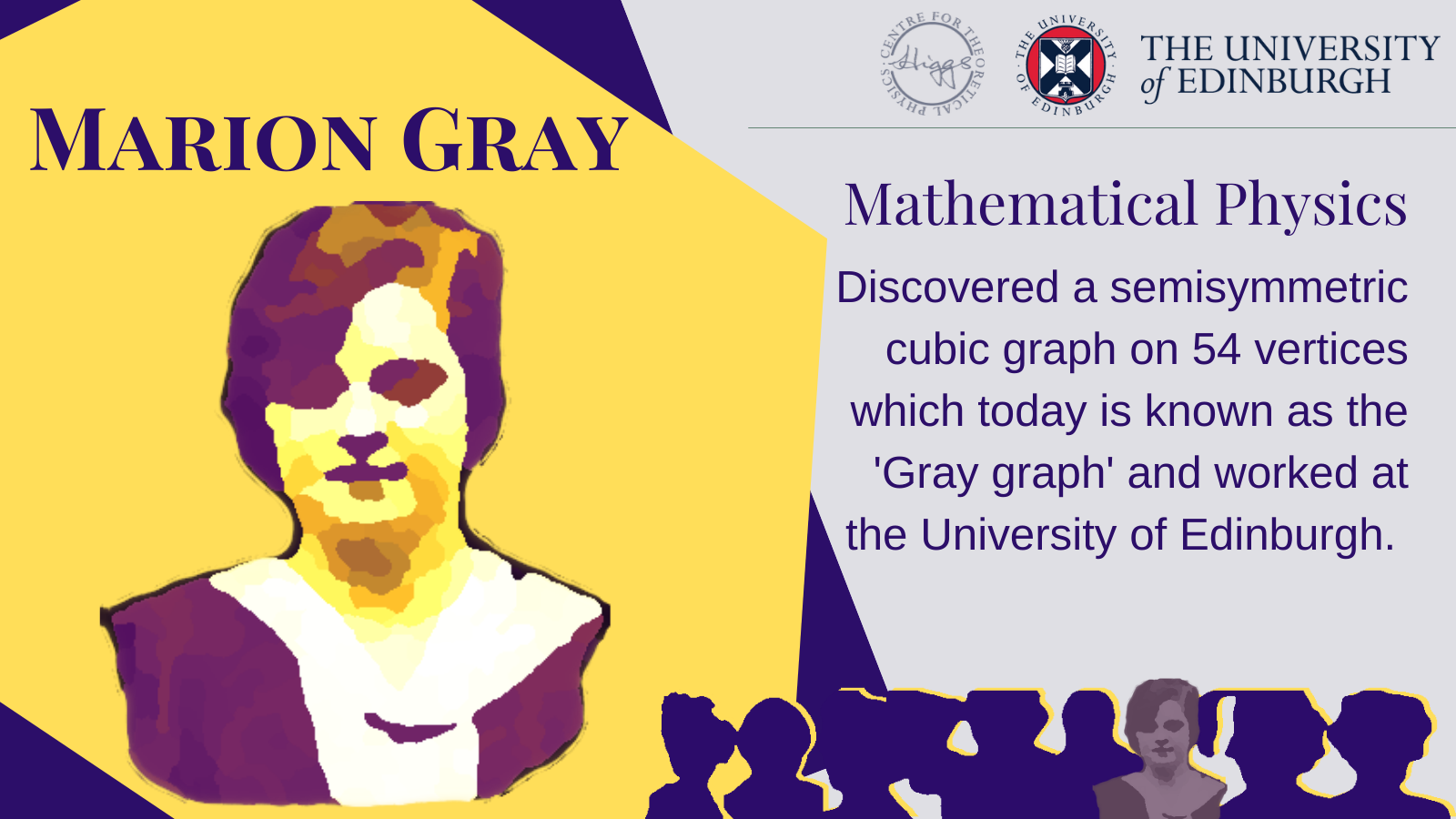 Marion graduated the University of Edinburgh in 1922 with first class honours in mathematics and natural philosophy, as a member of the Edinburgh Mathematical Society.

She obtained a PhD in Mathematics at Bryn Mawr College, USA and later worked as university assistant at Edinburgh and Imperial. In 1934 joined the Bell Telephone Labs, where she worked as a research engineer for 30 years.

She discovered a semisymmetric cubic graph on 54 vertices which today is known as the 'Gray graph'. 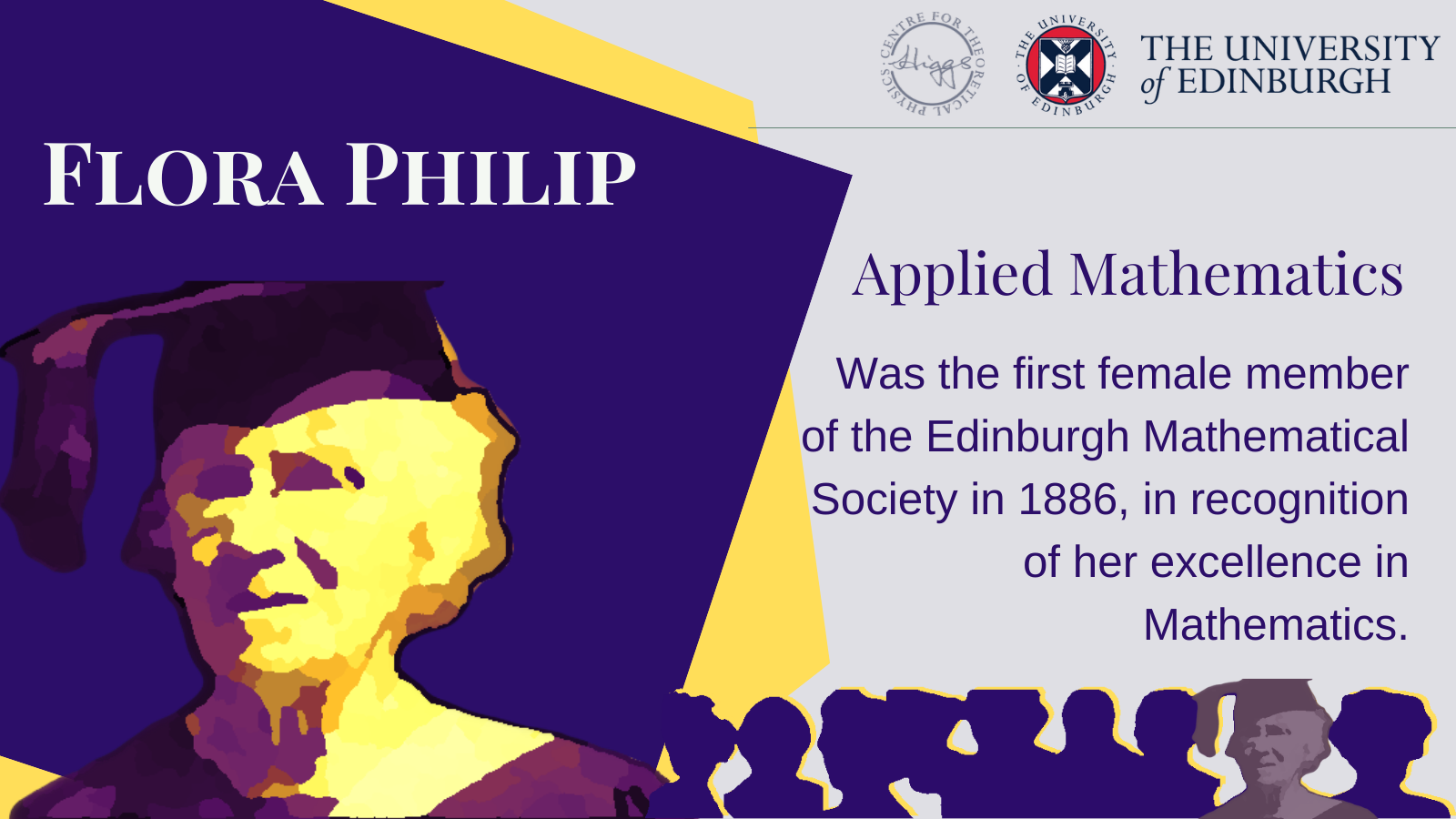 Flora was one of the first women to receive a degree from the University of Edinburgh in 1893.

She was also the first female member of the Edinburgh Mathematical Society in 1886, in recognition of her excellence in Mathematics.

She trained, before graduating, to teach at St George's Training College for Women Teachers, and briefly taught at the St George's High School for Girls in Edinburgh. 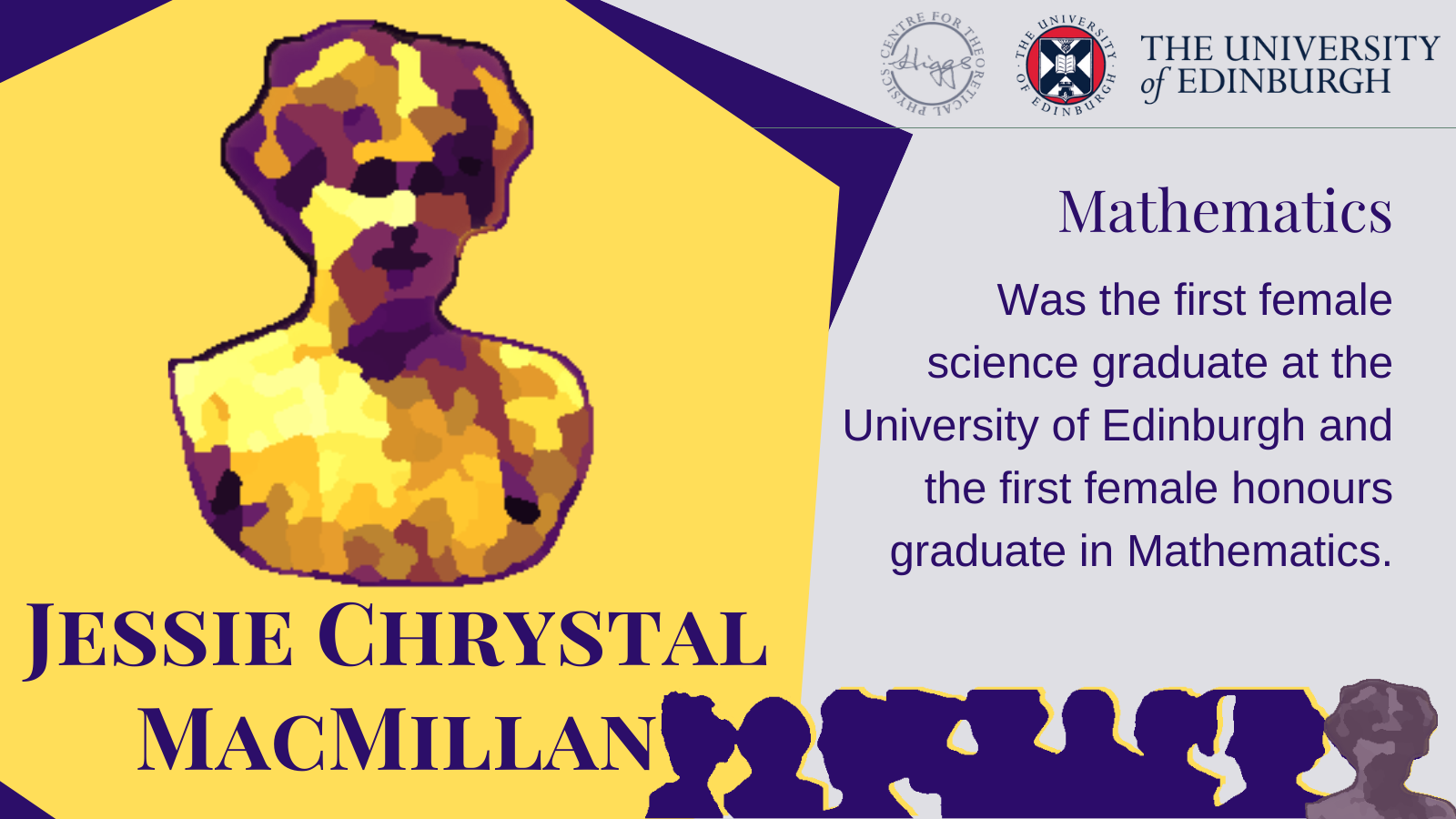 She joined the Edinburgh Mathematical Society in May 1897 when she was reading for her M.A. at Edinburgh. She was the second woman member of the Society.

She became active in the Women's Suffrage Movement and went on to become a lawyer. In 1908 she became the first woman to plead before the House of Lords, presenting her case that female university graduates should be given the right to vote.